The Makeover by Cowgirlcadet1701
Author's Notes:
The pictures may or may not show properly. If they don't, just open another tab on your browser and paste in the URL. I know it sounds like a lot of bother, but the story needs the pictures.
The Makeover

Lila O'Donnell was almost finished with her thorough inspection of the ship she had just inherited from her very wealthy and somewhat eccentric Uncle Max - the SS Broken Hand, formerly the USS Quahog. She walked into Sickbay.

A standard Mark I EMH appeared in front of her. 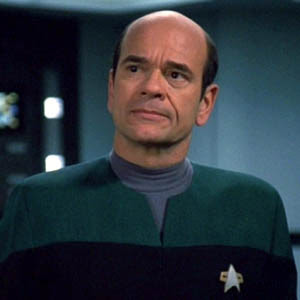 "Please state the nature of the medical emergency."

"There ainât one. I wanna talk to you. Sit down and listen."

She pulled out the chair in front of the desk, and as he complied with her request, she hopped up and sat on the desk itself.

"First, I want you to be aware that you will be the primary medical officer aboard this vessel. The reason for that being that it's almost impossible to hire a good practitioner of space medicine in the private sector, because, with very few exceptions, they're all in Starfleet. Not that I have anything against Starfleet. Now, it is my desire and intention that you be a full member of my crew, just as if you were human. To that end, you will have complete control of all your shut down codes, with free rein to create your own unique identity and personalize your physical appearance any way you wish."

Near the end of this speech, she hopped down off the desk and started moving towards the door. Just before she left, she laid a hand on his shoulder and smiled at him warmly.

"Welcome to the family."

Several hours later, the EMH was almost finished with his "makeover". He had adopted a friendly, "get along with everybody" personality, and decided that henceforth, Italian was his look.

No. He didn't want to take somebody else's name, even if that person was long dead.

No. It had a nice ring to it, but even now, the name "Casanova" carried a reputation he wasn't sure he wanted.

No. It was a nice name, but it just didn't seem right for him.

Yes. That was it. That was his name. It fit perfectly.

From this moment on, he would be a hot Italian guy named....