Stories set within an expansive shared universe that are seperate and stand alone but if read together lend to a larger picture and story scale.

Hope Station: Watchtower - stories concentrating on the diplomatic, economic and operational centre of a sector of Federation space bordering unclaimed space, Cardassia, Klingon, Breen and Kzinti. Base to the Sixth Cutter squadron and the attached relay of stations and outposts that man the borders.

Cheiron - stories featuring a crew of a Border Patrol vessel attached to the Sixth Cutter Squadron. Patrolling the notorious 'Gauntlet' and dicing with Breen and Kzinti, raiders and slavers. They are the frontline defence to holding the line.

Étoile Cheval - stories concerning bounty hunter Beatrix Knight, known as Beks, as she hunts down the criminal elements running rogue in the jurisdiction and universe of Hope Station and the Sixth Cutter Squadron.

Shepherd's Reach - a relay outpost charged with scanning and monitoring the border and patrolling a difficult nebula stretch. Wherein enemies may be closer than anyone expects.

Aegolius Harrier - stories involving the crew of an Excelsior class vessel assigned to the to the Cardassian peacekeeping and relief effort taskforce known as the Eleventh Fleet. Commanded by former Cardassian POW, Cyste Ryaenn, who faces the challenge of turning around a down on its morale crew and an outdated vessel in order to be up to the task of keeping the hard won peace post Dominion War.

Rhapsody Rabbit Gavilán - stories about a civilian cargo freighter crew captained by the adventurous Tabatha Katherine Chase. Ship and crew only want to make a profit but fates lands them amid the political intrigues and criminal plots within the Watchtowerverse.

Legacy - stories focusing on a joint colony venture between the Federation and Cardassia. Efforts to find and make a new world for Cardassia's needs faces unprecedented challenges and dangers from within and without.

A run of the mill bounty turns lethal for bounty hunter Beatrix Eliza Knight, known as Beks. Beks and her crew face off against a lethal assassin and the cost will be high and change lives forever.

A story set in the Watchtower Universe.

A Legacy of Ashes

The first tale in the Legacy stories focusing on a joint colony venture between the Federation and Cardassia.

In the wake of the devastation wrought by its allies at the end of the Dominion War, Cardassia finds it must turn to its one time enemies to find a way to survive.

Efforts to find and make a new world for Cardassia's needs faces unprecedented challenges and dangers, from within and without.

A story of the civilian cargo freighter Rhapsody Rabbit Gavilán and its motley crew. A Corellia class Medium Endurance Freighter working on the borders of the Federation, struggling to make a living and fighting to survive.

Painting created by Art deWhill [Stefan Böttcher] and used with his kind permission.

the Klingon world of Q'onraf where local customs dictate no energy weapons are permitted. Tabatha Chase finds more than she bargains for and mysteries surrounding passenger Ajshae continue to stack up. Blood pacts, business rivals and secrets land the Rabbit in trouble - again!

The creed of the Border Patrol Service is a simple one:

To save lives. To protect borders. To hold the line.

On the frontier, on the edge of Federation space, stands guard a series of stations and outposts charged with keeping a watchful vigil to be an ever vigilant sentinel. The first line of defence ...

Seven ficlets depicting life on a Space Station Relay Outpost for a newly appointed Lt. Commander. Outpost Shepherd's Reach, the farthest flung and unimportant outpost serving Star Station Hope is not the place of dreams. But it is where one Lt. Commander will make or break her career. 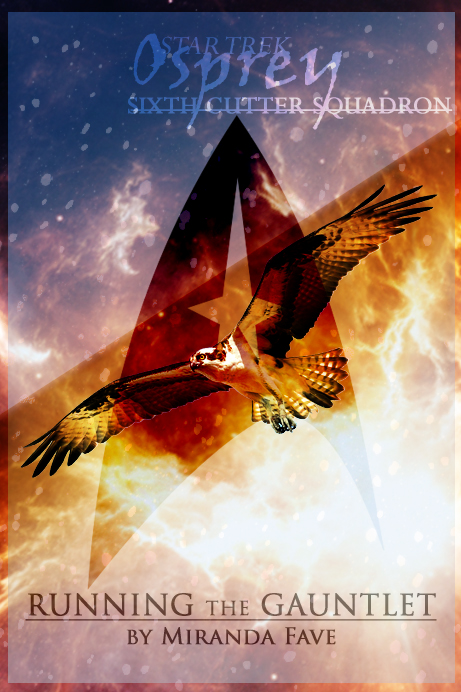 Tracking an Orion slaver in ‘The Gauntlet’, a treacherous region of space, the Border Patrol Cutter Osprey must mount a daring rescue and interdiction mission before it is hit by a deadly storm front. There’s a reason it’s called running the Gauntlet.

The first story of the starship Aegolius Harrier. A down on its luck ship and crew are assigned to the newly formed Eleventh Fleet. The crew  worry about their new assignment and are disturbed to learn that they are to receive a new commanding officer who comes with a troubling reputation.

The second story of the Aegolius Harrier. Ryaenn has taken command of her new ship but now she must prove herself to the crew and begin to win their loyalty. As Ryaenn readies the ship and crew for launch, she is faced with challenges ... and Ryaenn meets every challenge as a duel.

Written for the 2014 March Challenge:

Write a story with the opening or closing line âBefore the dying of the light,â any Trek setting or characters.

Winner: Before the Dying of the Light ChallengeÂ

Star Station Hope, known to the locals and crew as 'Watchtower', stands sentinel in a dangerous and volatile region of space. Today it is to pay host to the first Breen delegation since the Dominion War peace treaties. Tensions run high as crew, ambassadors and civilians prepare for what is not going to be just another day.