The Star Eagle Adventures chronicles the voyages of USS Eagle and her intrepid crew. Set in the 2370s, join Captain Michael Owens and his crew as they take on the toughest challenges the galaxy has to offer. From time travel, ancient and powerful civilizations and the merciless Dominion. For this crew, it's all in a day's work.
The Star Eagle Adventures is a proud member of the United Trek shared universe.
Visit StarEagleAdventures.com for more stories, information and for ebook downloads.

After the captain he has admired and respected is killed in action, Michael Owens reluctantly steps up to take temporary command. Months later, after violating clear orders, he makes the ultimate sacrifice.

Now, while his father pulls the strings behind the scenes, he has to come to terms with the consequences of his decisions.

The story of Michael Owens' rocky road to the captain's chair of the USS Eagle. The year is 2366 and Lieutenant Commander Michael Owens, the newly minted executive officer of the USS Columbia has been tasked to supervise a groundbreaking scientific experiment which could alter the galactic landscape forever.
Six years later, as now Captain Owens and his crew celebrate their first year serving aboard the USS Eagle, Owens has no idea that the consequences of his previous assignment will come catching up with him in a way he could have never thought possible.
Over the course of an unlikely adventure, Owens will have to face his painful past, come face-to-face with old enemies and perhaps his greatest challenge, will have to deal with the one man he never wanted to see again. His own father.
In the meantime the crew of the starship Eagle have their own mystery to unravel, one which will see the half-Romulan tactical officer, So'Dan Leva, fall for the wrong woman while helmsman Culsten and Doctor Wenera get more than they bargained for when they get sucked in deep into a deadly mystery.
Also available as an ebook here.

When Captain Amaya Donners of the starship Agamemnon appears to have gone rogue, Captain Owens and the USS Eagle are sent to investigate. Now they must join forces to prevent major war from consuming an entire world. Stardate: 50435 (2373 CE)
Captain Tazla Star has recently been given command of her first starship, a life long ambition come to fruition. But lacking the respect of her crew, she has found that being in charge is not at all what she had expected it to be.
Now her latest mission will force her to face her questionable past and she will have to decide between following orders or honoring old allegiances.
The Lone Redshirt's USS Bluefin and her crew guest star in this stand-alone prequel novella to All the Sinners, Saints. A crewman on Eagle falls madly in love with the spellbinding DeMara Deen. But in a place where enlisted men and officers don't mix, is his love destined to fail? For recent Academy graduate, Ensign Savannah LeBeau, Eagle is a dream assignment come true. Not only is her Academy boyfriend on board, one of her first duties takes her to a place of nearly limitless research possibilities.

But she soon finds out that not everything is how it appears. In more ways than she could have ever imagined. A team of junior officers on a routine mission answers a distress signal from an adrift Klingon ship. But they soon discover that the crew is in much worse condition than they have been led to believe ... much, much worse.


When there is no more room in Gre'thor,
the dishonored dead will rise. The starship Eagle is tasked with a vital mission in the ongoing war effort against the Dominion that promises to give its war weary crew a chance to catch their breath for a short time.
But when they are faced with a vicious and unprecedented crime committed against one of their own, a seemingly simple mission turns into a struggle for survival.
Explore a tale of murder, sabotage and mystery in the fifth Star Eagle Adventures feature novel.
Also available as an ebook here.
Read the Writer's Commentary here. After nearly two years of grueling warfare, the Dominion War is finally over. However on a remote planet somewhere between Federation and Cardassian space, a brutal ground war between Starfleet Marines and Cardassian forces continues.
Now it is up to Eagle and Captain Michael Owens to stop a pointless battle before it can claim any more lives and to bring the war fatigued troops home.
In the meantime, tactical officer So'Dan Leva considers his next career move and first officer Tazla Star must face her controversial past if she ever hopes to leave it behind her for good.
Loyalties will be tested in the sixth Star Eagle Adventures novel.

Also available as an ebook here. 10 years ago, the Starship Enterprise was transported over 60 thousands light-years to come face-to-face with what would become the Federationâs greatest nemesis. But now, as universes diverge, different choices have lead to a very different future.
After a long and bloody war with the Borg, the Federation has re-emerged as a broken shadow of its former self. Splintered and engulfed in internal conflict, embittered former allies have chosen their sides, unwilling to compromise, they battle each other for their vision of the future.
As news of a new super-weapon under development spreads, the fragile status quo threatens to spill out into all out war as conflicts and tensions mount.
A novella celebrating 10 years of United Trek and featuring characters by Bry Sinclair, DarKush, Galen, Michael Garcia, Sam Redfeather and The LoneRedShirt.
Also available as an ebook here. The Starship Eagle and her crew are coming home for the first time in over two years for long overdue shore leave.
The third Eagle Vignette Series features ten short stories which follow the crew as they return home and face a new set of challenges.
Join flight controller Lif Culsten and chief engineer Louise Hopkins making the long journey to Culsten's remote and mysterious homeworld, science officer Xylion revisiting a pivotal moment of his youth, Captain Owens attempting to heal the rift between him and his father, security chief Nora Laas discovering a part of herself and other adventures that will have momentous impacts on the officers of the Starship Eagle.
Homecoming continues on the Road to Quantum Divergence that will culminate in the next great Star Eagle adventure.
Also available as an ebook here. 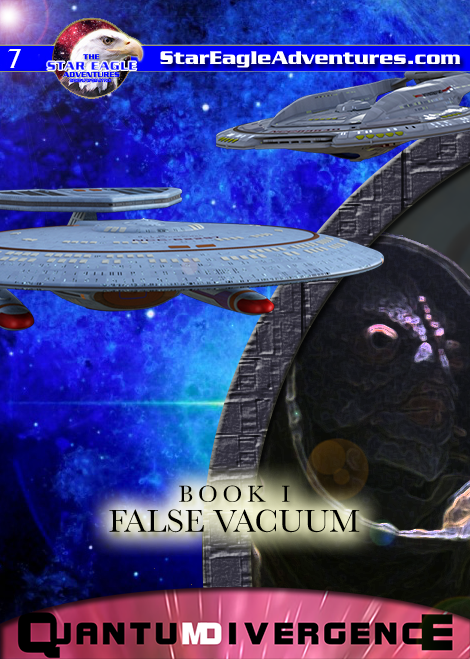 When the fiercely xenophobic Krellonian Star Alliance faces a planetary emergency on one of their colony worlds which has left their medical community baffled, they have no choice but to turn to the Federation for desperate needed help.
The starship Eagle, after much needed shore leave and a comprehensive systems overhaul, is dispatched to cross half a quadrant to assist the Krellonians before the situation can get out of hand.
But as Captain Owens and his crew are quick to learn, much more may be afoot on this remote world than they were led to believe as a threat to not just the Federation but to the entire galaxy begins to emerge.
Take the first step in a journey that will go beyond time and space in Book One of the Quantum Divergence trilogy.
And donât miss the Road to Quantum Divergence stories, Civil War and Homecoming.

After an eventful mission into the star-packed globular cluster of the Amargosa Diaspora beyond Federation space and into the isolated and xenophobic Krellonian Star Alliance, the Starship Eagle learned of an invasion plan by subspace aliens, assisted by elements within the Star Alliance.
With the help of Bensu, the enigmatic bartender on Eagle but in reality a man possessing unique characteristics and knowledge about the aliens, Michael Owens and his crew, along with with his father, have located a massive superstructure hidden away in a subspace pocket.
Now, as the startling truth of the aliensâ plans becomes more obvious, Eagle will find itself deeply entwined in a dangerous game which goes far beyond their own universe and will pit them against friends and foes with familiar faces which will shake Owens and his crew to the core.
Continue the journey into the depths of quantum reality in Book Two of the Quantum Divergence trilogy.
And donât miss Book One, False Vacuum and the Road to Quantum Divergence stories, Civil War and Homecoming.

Unable to prevent the annihilation of two universes, Michael Owens and the crew of the starship Eagle find themselves in yet another reality not their own.
â In a galaxy that barely resembles his home, Michael must come to terms with his own personal demons and a family he had long thought lost. â
Now, as the motivation of their most important ally is brought into question, the crew finds itself stuck between two of the Federation's greatest enemies in a race against the clock to prevent the unthinkable. â
Continue the journey into the depths of quantum reality in Book Three of the Quantum Divergence trilogy.
And donât miss Book One,Â False Vacuum, Book Two, State of Entanglement,Â and the Road to Quantum Divergence stories,Â Civil WarÂ andÂ Homecoming.

These are the stories of the rank and file of the starship Eagle, the redshirts, the ensigns, the crewmen, the inexperienced, the ones who usually don't get to share the limelight with the illustrious senior staff.
Life on the lower decks can be rough. From stringent commanding officers, to dangerous aliens, short life expectancies and complicated relationships. For these young men and women working hard isn't always enough.