Reviews (3)
Summary: In the wake of the destruction of the U.S.S. Orion NCC-3013, Captain Reihyn waits to hear the verdict of the hearing and his new orders.
Chapters: 1    Table of Contents
Categories: Expanded Universes
Characters: None
Genre: Other
Warnings: None
Series: Star Trek: Orion
Completed: Yes    Word count: 2027    Read Count: 1165
[Report This] Published: 14 Apr 2016 Updated: 14 Apr 2016
My Weekly Prompt Stories by Ln X    Rated: MA      Reviews (0)
Summary: For each Weekly Prompt I will write a story simply for the sake of stretching my writing wings.

Seven years ago, Captain Scrog was close to being retired; he was hoping to be promoted to Rear Admiral the next year. Q and the borg come on the scene; this is a story of self-realization.

Centuries ago, Captain James T. Kirk of the Federation starship Enterprise encountered a group of aliens representing the Kelvan Empire, a vast interstellar nation based in the Andromeda Galaxy. Now, years after that first encounter, the Federation is ready to return the favour...

The USS Pioneer: first ship of her class, equipped with a revolutionary foldspace drive that makes possible the opening of a new frontier, intergalactic travel. On the eve of the four hundred year anniversary of a Federation that now spans all four quadrants, Pioneer prepares to launch a mission to the Andromeda galaxy. Captained by Marta Soong, Starfleetâs first Orion commanding officer, the crew of Pioneer are ready for anything in order to complete their mission.

But when underlying tensions explode in a deadly attack on Pioneer, the ship finds itself stranded in another galaxy with a damaged foldspace drive and no apparent way home. So when the ship picks up what appears to be a Federation comm signal coming for a nearby system, they set out looking for help. But Pioneer will soon discover that a friendly name may hide a deadly enemy...
Chapters: 4    Table of Contents
Categories: Original Series, Expanded Universes
Characters: Kirk, James T., McCoy, Leonard (Bones), Spock
Genre: Action/Adventure, Drama, General, Humor, IDIC, Mystery, Other
Warnings: Adult Language, Adult Situations
Series: Star Trek: Federation
Completed: No    Word count: 7930    Read Count: 7419
[Report This] Published: 25 May 2014 Updated: 12 Jun 2014
Vega Colony by trekfan, TemplarSora    Rated: K      Reviews (7)
Summary:

This is the story of one of the survivors of Vega Colony and their part in the battle.

My entry for the "Steal All The Toys Challenge" 2014

Before taking on his new position as DS9's first officer, Elias Vaughn takes in some of the scenery.

Chapters: 1    Table of Contents
Categories: Deep Space Nine, Expanded Universes
Characters: Vaughn, Elias
Genre: Other
Warnings: None
Series: None
Completed: Yes    Word count: 462    Read Count: 1069
[Report This] Published: 24 May 2014 Updated: 24 May 2014
Federation Day by CaptainSarine    Rated: K      Reviews (99)
Summary: A 600 year journey through the history of the Federation, centered around a single day - 12th August, date of the Founding of the Federation.

Kira Nerys is ready tot take her place as the new station commander.

As it worsens, reality and fantasy blend...

Part of the Restoration universe.

Reviews (15)
Summary: In a far future where the Federation has expanded to encompass the whole galaxy, a new ship in a new galaxy finds itself stranded far from home with little hope of ever returning...

When the USS Phoenix takes part in the final battle of a war between their Kalindan allies and the Ilonan Hive, they are exiled to the far reaches of a new galaxy. Now, ten years later, they think they may finally have found a way home...

When the King of Dreams offers them a bargain – retrieve his stolen heart in return for a key that may just get them home – Captain Andrew Lee and his crew agree to launch a desperate mission across dimensions. When faced with an insane goddess and her army of quantum spiders, though, do they really have a chance?
Chapters: 8    Table of Contents
Categories: Expanded Universes
Characters: None
Genre: Action/Adventure, Drama, Family, Friendship, General, Mystery, Other
Warnings: Adult Language, Adult Situations
Series: None
Completed: No    Word count: 14851    Read Count: 15651
[Report This] Published: 16 Nov 2011 Updated: 01 Feb 2013
The New Threat by mdgarcia    Rated: M 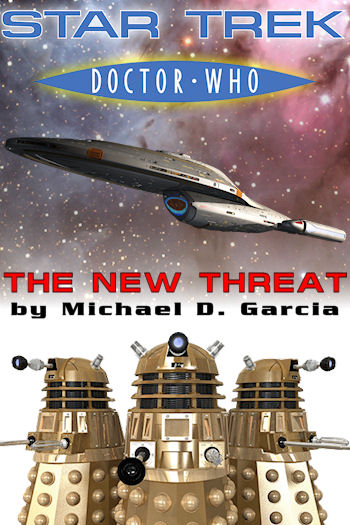 The crew of the starship Bellerophon investigate a distress call from a secretive  science outpost on the fringes of Federation territory.  When they arrive, only bodies and the wrecked remains of the outpost are found, and they're ordered to performed a standard investigation of the accident... under certain information restrictions imposed by the ship's captain.

But when they discover the result of the outpost's experiment, they realize that a brand new threat has been introduced to the United Federation of Planets, with only Bellerophon and her crew standing in the way...

Hello everyone. With the discussion forum down and not all of us having our Ad Astra blogs up and going I thought I would try to create a little round robin story where we can all post a little response to my posited ‘How do we cope when technology fails?' prompt.

Our heroes would have to tackle Star Trek life without the magic of their technology - say no transporters, no replicators, no grav-plates, no warp power, etc. Maybe they find themselves in a crutch, maybe it ends up with some hilarious or fish out of water moments, or puts their lives in mortal peril. Have at it. Remember to keep it clean given the K rating and that this is just for fun to help us while over the absence of the forum.

Just post your prompt response as a new chapter and sign your name to the ‘chapter' you write. Well that's the plan. Fingers crossed as to whether this works! Remember, just write it, don't edit it to death - for this one time on the archive! ;)

Dispatches from the Romulan War is a unique, member-written fan fiction series based at TrekUnited.com. It picks up where Enterprise left off and tells the story of the Romulan War, one of the most significant and defining events in the Star Trek Universe, through the eyes of the reporters and news agencies that lived it.
Chapters: 46    Table of Contents
Categories: Enterprise
Characters: None
Genre: Other
Warnings: Violence
Series: None
Completed: No    Word count: 30124    Read Count: 131120
[Report This] Published: 09 Feb 2009 Updated: 25 Jul 2011
Star Trek: S'oren Daughter of Saavik by Livia Ellis    Rated: K

After defeating the Dominion and ending the threat of the Borg, the member worlds of the United Federation of Planets may well have hoped to finally find peace. After the dramatic destruction of Romulus, though, chaos seems destined to wrack the Alpha and Beta Quadrants for the forseeable future.

As both the Romulan and Klingon Empires draw ever closer to total collapse, a single man escapes from one of Starfleet’s few high security prisons and gathers a group of mismatched thieves, hackers and conmen to pull off the coup of the century: steal from Section 31 itself…

Jules: A mysterious man with a shadowy past, his motivations for wanting to steal from Section 31 are as shaded as his knowledge of covert operations.

Eloria: A Kriosian empathic metamorph with a genetic fault that prevents her from imprinting a final mate, she has found her place in the galaxy as a high-class escort… and a formidable con artist.

Laezar: A Chameloid male serving a term in a Klingon prison, he has links to Section 31 and may hold the key to deciphering their final goal.

Ki’mel: A female half-Romulan, half-Klingon, she is a descendant of the Carraya IV settlement, trained in the fighting ways of many Alpha and Beta Quadrant races.

Tag: A young Ferengi male with no lobes for business but a talent for pickpocketing and elaborate theft.

Elim Dejar: A former operative of the Obsidian Order with a few financial problems and a very angry bounty hunter on his trail.

As their plan unfolds, though, every single one of them will realise that they are wading in waters too deep to handle, and facing a chilling secret that could see the unravelling of the Alpha Quadrant itself...
Chapters: 1    Table of Contents
Categories: Expanded Universes
Characters: Ensemble Cast - Multiple
Genre: Action/Adventure, Drama, General, Mystery, Other
Warnings: Adult Language, Adult Situations
Series: None
Completed: No    Word count: 2672    Read Count: 1412
[Report This] Published: 29 Jan 2010 Updated: 29 Jan 2010
1 2 [Next]